Cenozoic Biostratigraphy, Chronostratigraphy and Paleooceanography in the Boso Peninsula and BANDAISAN GEOPARK in the Aizu Region, East Japan

Excursion A provides a rare opportunity to look through the geologic history of accretionary processes and sedimentation in the slope basins from the early Miocene to the Pleistocene, with a hopeful candidate to the Global Boundary Stratotype Section and Point (GSSP) for the lower and middle parts of the Pleistocene Stage. In the first day, the trip starts from the GSSP candidate at the Tabuchi section along the Yoro Valley where radiolarian biostratigraphy is examined by Itaki (Stop 1). The middle to upper Miocene Amatsu Formation (Stop 2) is key strata to directly correlate between tropical radiolarian zones (RN5 to RN9) and Northwest Pacific zones (Eucyrtidium inflatum to L. rendodoensis–S. acquilonium zones) (Sawada et al. 2009, Jour. Geol. Soc. Japan, 115). In contrast to these sediments deposited in the fore-arc basin, the Hota Group is significantly deformed by effect of accretionary process (Stop 3). The geologic structure in this group was reconstructed based on radiolarian fossils collected from >100 localities (Saito 1992, Contr. Inst. Geol. Pal., Tohoku Univ. no. 93). The Chikura Group (Stops 4, 5) is interesting because of gravity flow deposits and the occurrence of cold-seep clams which take energy from hydrogen sulfide or methane. In the 2nd day, we will visit raised coastal terraces named as ‘Genroku Terrance’ (1703 Genroku earthquake; M 8.2) and ‘Taisho Bench’ (suddenly uplifted at 1923 Great Kanto earthquake; M7.9–8.2) (Stop 7). In the 3rd day, we will look Mt. Bandaisan, an active volcano, and enjoy BANDAISAN GEOPARK on the morning (Stop 8). After it, we go to JR Niigata Station. 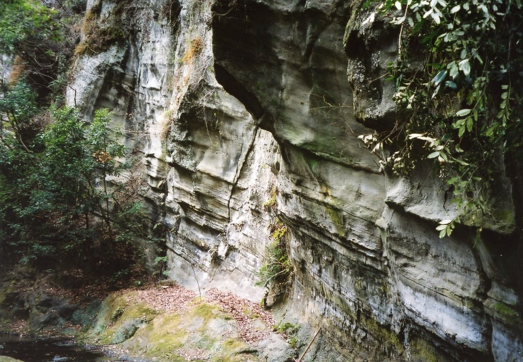 The OK Tuff, coded as Am 78 Tuff in the upper Amatsu Formtion in this area. This is an important key bed as a well known wide-spread tephra. 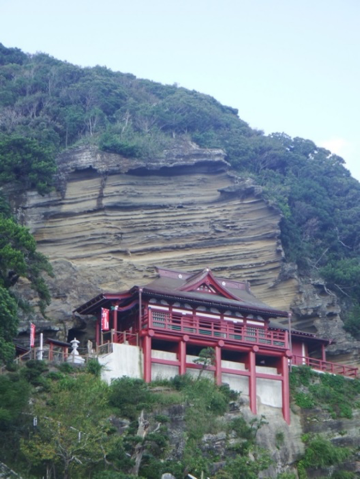 The Gake-Kannon, formally Daifukuji Temple, looming on a lofty cliff made of the Chikura Group.

Note: All attendants need to arrive near the meeting point ONE DAY BEFORE the start as this excursion starts in very early morning